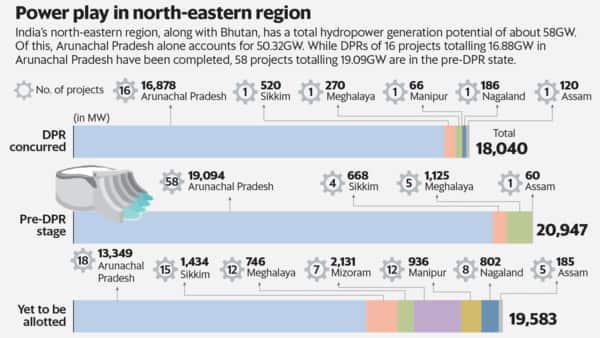 As many as 103 private hydropower projects in Arunachal Pradesh totalling about 35 gigawatts (GW) are still to take off despite the government’s Act East policy focus.

This comes against the backdrop of growing concerns on the delay in India’s plans to generate power from rivers originating from neighbouring China.

The projects that are estimated to require investments of about ₹3.5 trillion were awarded to the private power producers by the Arunachal Pradesh government, said three Union government officials aware of the matter on condition of anonymity.

The state government has now approached the Centre to explore whether state-run power producers such as NHPC Ltd would want to take over the projects, said the three people mentioned above.

The Arunachal Pradesh government has already issued termination notices to 21 such projects totalling around 2.5GW, the three people mentioned above said.

The government has been pushing an economic agenda, especially with respect to long-pending infrastructure projects, keeping in mind the geo-economics of the northeastern region. The National Democratic Alliance (NDA) government has also substantially increased budgetary support for the region.

A delay in building hydropower projects in Arunachal Pradesh on rivers originating in China will affect India’s strategy of establishing its prior-use claim over the waters, according to international law. India is concerned that hydropower projects planned in Arunachal Pradesh may be affected by the neighbouring country’s plan to divert water from rivers that flow into the Brahmaputra towards the arid zones of Xinjiang and Gansu.

Arunachal Pradesh, which has the greatest hydropower potential among Indian states, awarded private companies contracts to build four hydropower projects though NHPC had prepared their detailed project reports (DPRs), Mint reported on 8 October 2012. A DPR forms the basis for implementing capital-intensive projects, which involve relocation and resettlement of project-affected persons and the ability to withstand geological surprises and also requires a substantive investment of time and money. “The private sector companies don’t have the capacity to set them up,” said another of the officials mentioned above.

The Comptroller and Auditor General of India in a report, Performance Audit on Capacity Expansion in Hydro Power Sector by CPSEs (central public sector enterprises), tabled earlier in Parliament, said the power ministry should instruct state governments that allocation of projects above 100 megawatts needs to be “fair, transparent and competitive”.

India’s north-eastern region, along with Bhutan, has a total hydropower generation potential of about 58GW. Of this, Arunachal Pradesh alone accounts for 50.32GW. India at present has an installed generation capacity of 357.87GW, of which 13% or about 45.4GW comes from hydropower projects.

“Doors are open for projects in the North-East particularly in Arunachal Pradesh. Hydropower will play an important role in the development and integration of the region with the mainland,” said Balraj Joshi, chairman and managing director of NHPC.