The season of festivities is here and so is an array of options for travellers to decide where to go. If you are too bored of attending the same festivals every year and want to get an insight into the lesser known festivals in India then we have exactly what you want-

Festivities in India are not synonymous with celebration but it also brings with it the holiday spirit. The month of October in India this year has some of the major festivals to flaunt.  While some are too popular there are others that are still not known by many but are grandly celebrated. If you are someone who is too tired of the mainstream festivities and wants to witness the nuance of the lesser known festivals in India, then we have a mixed bag of suggestions for you-

The Shirui Lily Festival held in Ukhrul, a small town in the north-eastern state of Manipur, is celebrated with an objective to spread awareness about the endangered state flower Shirui Lily, its conservation, as well as promoting the hill district of Ukhrul as a potential tourist destination. The festival features colourful Tangkhul Naga games, live music, rock concerts, cultural shows, beauty pageants, exhibits, folk songs, traditional dances and indigenous games and sports competitions like the Shirui Lily Grand Prix, mountain biking, etc. This festival is both for the culture enthusiasts and adventurous souls.

Besides attending the festival, tourists can utilise their time by exploring the Shirui Hills, climbing Shirui Peak and hoping to see the famous Shirui lilies in bloom, visiting the Khangkhui Lime Caves. Excavations at this cave have unveiled that people dating back to the Stone Age lived here.

How to reach: Take a bus from Interstate Bus Terminus near Khuman Lampak in Imphal (the capital city), which plies daily on the Imphal-Ukhrul route connected by NH 150. 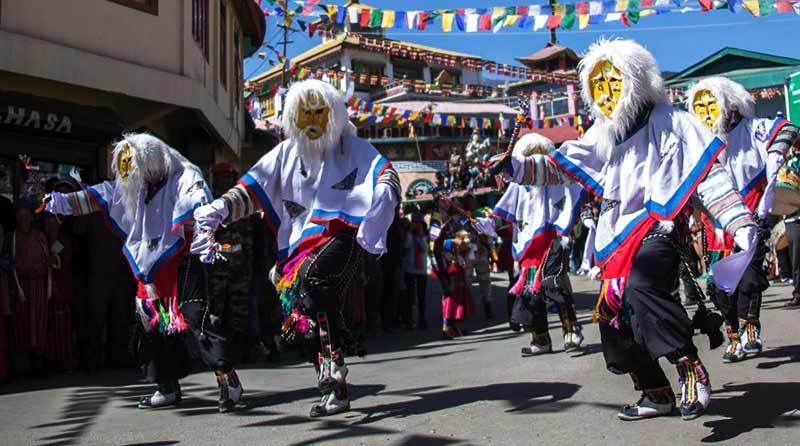 Tawang is a beautiful festival to showcase the rich varied traditions and cultures of Arunachal Pradesh. Organised by the Arunachal Pradesh Tourism Department, the annual Tawang Festival highlights the major tourist attractions in the region along with the traditional values.  The Tawang hill station is home to several tribes and the major highlights of the festival include a huge fair, dance of Yak, tribal participation with various dances and traditional rituals, traditional monastic dances, street performances, the traditional parade, Buddhist religious functions, and AJI-LHAMU DANCE is the main attraction of the festival. One can also visit the places of interest like the Bumla Pass, Sela Pass, Gorichen Peak, Madhuri Lake, Nuranang Falls, P T Tso Lake, Tawang monastery, Jang Waterfalls etc.

How to reach: You can take a bus from Guwahati to Bomdila and then leave for Tawang the next morning either by bus, car or shared taxis. 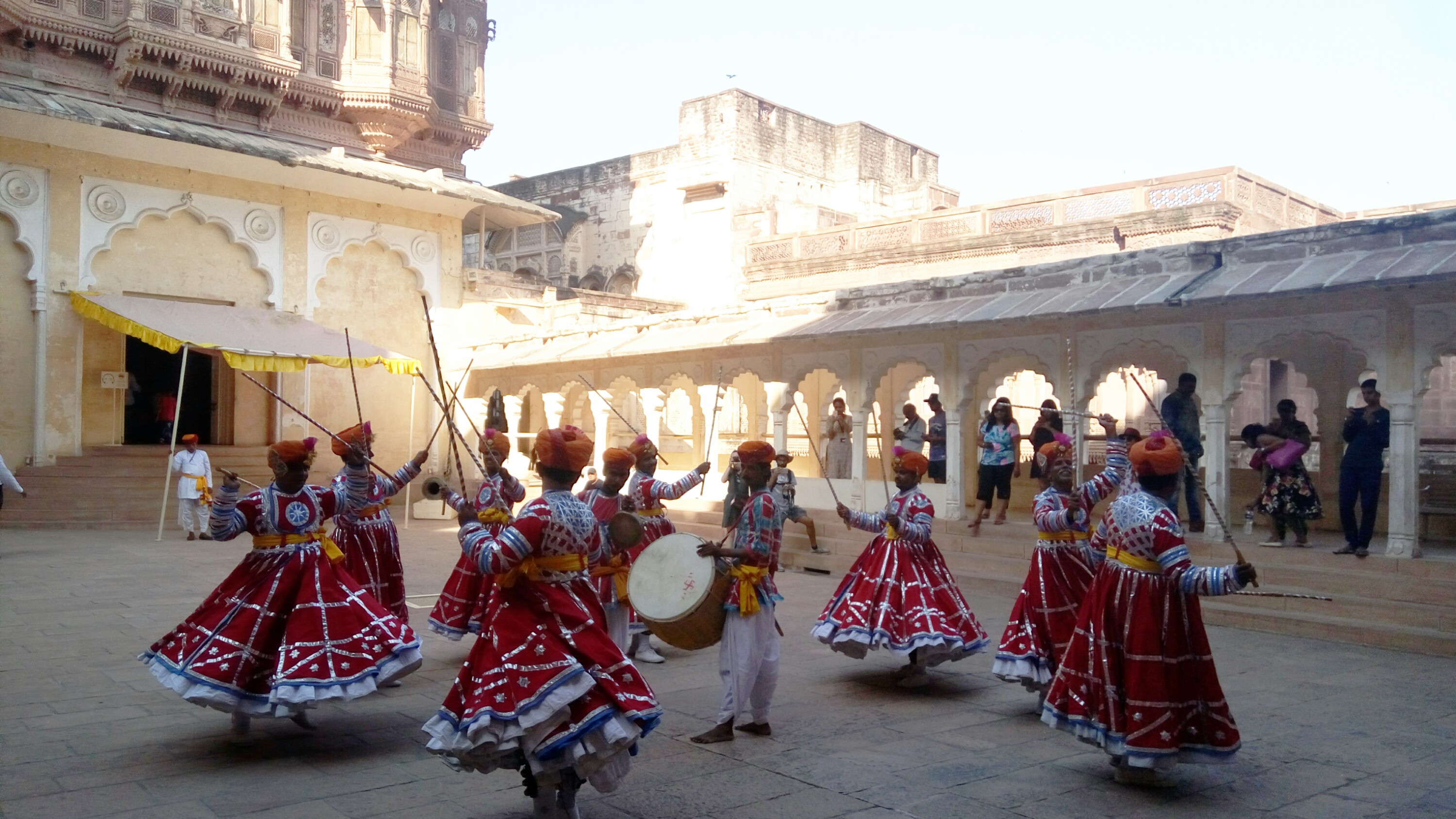 The Rajasthan International Folk Festival or the RIFF is an eclectic festival that showcases regional roots music and arts. It’s a heady fusion of interactive educational events, staged performances and late night jam sessions where hundreds of artists create interesting stage performances that highlight the music heritage of the state. The festival has an outstanding location in and around the imposing Mehrangarh Fort. UNESCO has endorsed the Jodhpur RIFF as the “People’s platform for creativity and Sustainable Development”.

This year, Jodhpur RIFF will have a special focus on poetry, song/ lyrics of folk music in Rajasthan – both traditional and contemporary.

How to reach: Well-connected with buses, cabs and trains from all important cities around the country, the Jodhpur airport is just 5 km away from the city center. 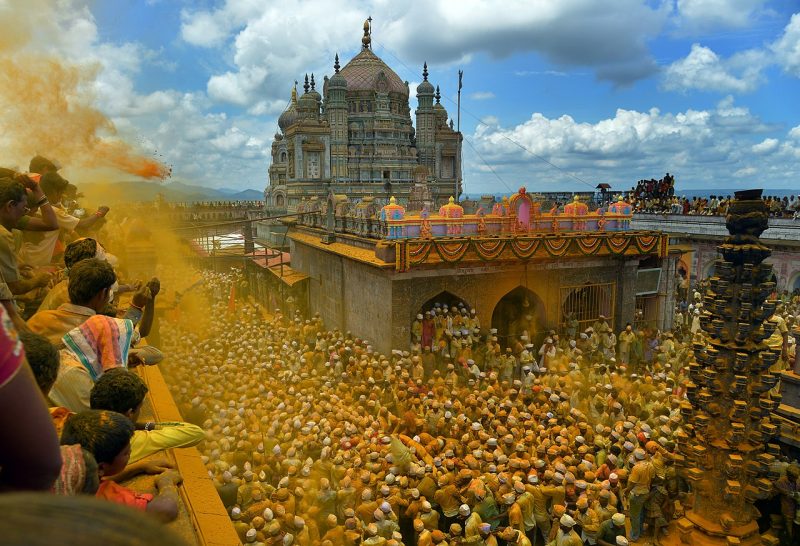 The Bhandara Festival or the Great Turmeric Festival involves an astonishing amount of turmeric being thrown all over the temple premises by energetic devotees, who also sing and dance. The festival is celebrated with much fervour and enthusiasm among the deities of Lord Khandoba, a renowned folk deity who lived around the 9th century A.D. At noon, the temple deity is taken out in procession and given a holy bath in the nearby river, which is the main highlight of the occasion. The festival takes place on Somvati Amavasya– a new moon day that falls on a Monday. It usually occurs two or three times a year. Lord Khandoba is typically depicted with four arms, in one of which he holds a Bhandara-patra or the bowl of turmeric powder. Bhandara in Marathi means turmeric.

Immersed in turmeric, devotees sing and dance invoking the deity in their prayers. The procession sees thousands of devotees waiting to touch the palki or palanquin, which carries the deity for a bath from the temple on the hill to the Karha River.

Where: Khandoba temple in Jejuri, about an hour and a half southeast of Pune in Maharashtra

How to reach: You can take a day trip by car from Mumbai. 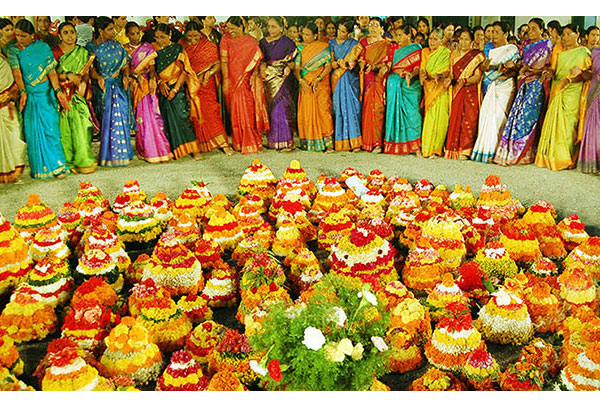 The state festival of Telangana in south India, Bathukamma that means ‘Mother Goddess come alive’, is a flower festival that celebrates life and the Mother Goddess during Navaratri. The festival is also regarded as the Spring Festival of Goddess Gauri. Bathukamma festival is a floral festival and during the festival, a beautiful flower stack is arranged in a unique style in the shape of a temple, which usually consists of seasonal flowers, having medicinal values. Women sing old folk devotional songs and take the Bathukammas out in procession to immerse them in water on the last day.

How to reach: Along with extensive rail network the regular services of state roadways and privately owned buses makes the journey easy and hassle-free.