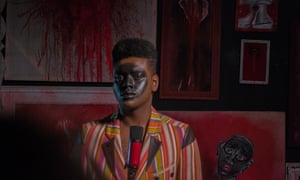 When Brazil’s far-right president, Jair Bolsonaro, slashed public funding for the arts earlier this year, the director of the country’s top film festival knew her event was in trouble.

“We realized we wouldn’t have the funding to put together a festival … We were hit really hard,” said Ilda Santiago, who has been running the Rio international film festival for two decades and had faced years of eroding local government support.

A public plea for support and months of desperate campaigning followed – including a crowdfunding drive that helped earn the festival a stay of execution. After a one-month delay, Brazil’s premiere film expo will open on Monday – albeit with a slimmed-down program of just 190 films, compared with up to 400 before.

But the festival’s fight for survival is symptomatic of a wider crisis engulfing Brazilian cinema under an ultra-conservative president who has identified the arts as a key source of opposition to his administration and declared the state has “bigger priorities” than culture.

“The consensus is that the destruction of the Brazilian film industry is in full joyful swing by this far-right government,” Kleber Mendonça Filho, one of Brazil’s most celebrated directors, wrote on Facebook last week.

“What the government is doing is strangling Brazilian cinema,” said Eduardo Valente, a film director and critic. “They are making it harder and harder for this sector to exist.”

Brazilian cinema – put on the map by global hits such as City of God and Aquarius – has suffered a succession of blows since Bolsonaro took office in January, from a general lack of interest in the arts to more pointed attacks on films dealing with themes such as sexual diversity and race.

Diego Paulino was among those whose funding vanished. A week before the 28-year-old was due to fly to Lisbon to promote his short film Negrum3 at an LGBTQ+ festival, Ancine asked him to return the 4,600 reais (£883) grant for his trip.

“I was left with nothing,” said Paulino, whose film deals with “blackness and queerness” and was produced last year with public funding.

With the help of a crowdfunding campaign Paulino made it to the festival – but, to him, the government’s message was clear. “They say it’s about the money but we know that’s not what it’s about. It’s about making a statement.”

In its most symbolic and explicit blow to the film sector, the Bolsonaro government in August also suspended a 70m reais (£13.5m) public television grant scheme slated to finance several series focusing on LGBTQ+ issues, sexual diversity and race.

The president personally attacked four projects earmarked for funding. “It’s money thrown away,” Bolsonaro said in a social media broadcast. “There’s no point in making a movie with this theme.”

The assault on cinema exploring issues of diversity has struck a particularly sinister chord in Brazil, where censorship was a key tool of the 1964-1985 military dictatorship for which Bolsonaro often expresses admiration.

Maurício Macêdo, whose project Sexo Reverso was among those lambasted by the president, believes cinema is being persecuted and has been “chosen as the enemy” by Bolsonaro’s government.

“This was undoubtedly censorship,” said Macêdo, whose project explores the curiosity of the Metis indigenous people in the sexual preferences of a white anthropologist studying the tribe. “The government isn’t interested in discussing themes that try to give visibility to indigenous people, to LGBT people.”

Ancine, which many see as a crucial support structure for Brazil’s nascent independent cinema, has also been dramatically weakened under Bolsonaro. The institution saw its budget slashed by nearly half and its financing activities have largely ground to a halt.

Three of the four seats in the agency’s directorial board are currently vacant, making it impossible for funding to be distributed or decisions made about future projects, said Valente, who worked there until 2016.

“That’s the most cruel and, in a way, invisible hand that is being played right now. The government is killing this industry through inaction,” said Valente. “Because I’m pretty convinced it’s a conscious decision and not something that’s just happening by chance.”

In an industry where long-term planning is central, the uncertainty has been crippling. Valente said the result would probably be a decline in the number of Brazilian films being produced.

“What’s going on is going to destroy the independent film industry that was built with funding from Ancine,” he said. “A newcomer, someone with no experience, coming out of college – they’re not going to be able to make movies anymore.”

Bruno Victor and Marcus Azevedo, whose project Afronte was also hit by the cancellation of the Ancine television grant, have found this out the hard way. The film-makers have yet to secure financing to produce their series.

“We need public support to produce our projects because here in Brazil, it’s the only option we have,” said Victor, 28, whose project focuses on five transgender people in the country’s north-east.

For many Brazilian film-makers, the future remains uncertain. Some are turning to streaming services such as Netflix for help producing work tackling LGBTQ+ issues or diversity themes. Others are leaning on more supportive municipal or state governments that still champion cinema.

Others, however, are training their cameras on topics less likely to offend the government.

“I think we’re all scared,” the director said. “So we are self-censoring in the things we want to talk about – and that’s the most dangerous part.”